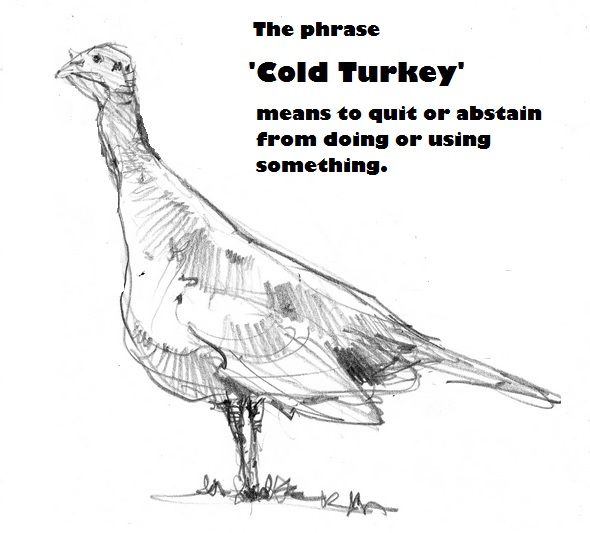 the abrupt and complete cessation of taking a drug to which one is addicted.
“I had to go cold turkey”
adverb
NORTH AMERICAN

in a sudden and abrupt manner.
“I had to quit drinking cold turkey”

For a long time I had a sex addiction. I loved the high I felt after experiencing an orgasm. According to a chatelaine.com article, “Before orgasm, oxytocin, released from the brain, surges and is accompanied by the release of endorphins, our natural pain-killing hormones.”
(http://www.chatelaine.com/health/sex-and-relationships/more-sex-is-the-secret-to-a-longer-healthier-life/)

I lost my virginity when I was seventeen to my highschool sweetheart. We were together for five years, and then we grew up and went separate ways. At twenty-two, I began dating and realized it was not easy. The game was exhausting, but I learned that if I wanted to get laid, then I had to play. After a series of relationship attempts, where I ended up broken-hearted, I decided at the age of twenty-four, that I was going to treat sex the same way guys do.

In my book ‘Sexcapades: Lessons in Sex Ed’ I state “ I think I had finally figured out what I wanted out of sex…no strings attached. I was in my mid-twenties, and for the first time I was not worried about what would happen next.” This began an eight year spree of casual sex, that came to an abrupt end this January.

As I moved around in the United States and then on to Europe, I had a lot of personal growth and learned new things from each experience. At the beginning of this year, I was juggling a bit and started the new year with a few different ‘bangs’! I had slept with an old flame during a New Years Eve trip, and then jumped in the sack with the guy I was dating back home within one week of each other. By the end of the month, I had slept with a third person.
It was not until I was rejected by the third person, after suggesting more casual sex, that I realized something needed to change. At this time I was also told that I needed to ‘stop identifying with my body’. It was time for spiritual growth.

My spiritual growth has always been a gradual process. From growing up in a strict, religious house, to not identifying with organized religion at all as a young adult, I was always on one side of the spectrum, but never in the middle. When I had a reality check after my university years, and realized I did not want to fit into “society’s mold”, I moved away from the only place I had ever called home. I went through another transition when I moved again in my mid-twenties. I began doing yoga and reading more about natural ways of living. I took workshops to help my spiritual growth, related to yoga and being a Highly Sensitive Person (HSP). I also read more about Ayurveda and learned how to garden.

January 2018 took a turn when I realized I had control of my body, and if I wanted to change the old patterns, then I had to make a big decision. I stopped having sex ‘cold turkey’. It has not been easy, but I have found that I am using that energy to be more creative. It has been liberating, but sometimes I have to remind myself that I am ‘in recovery’ and even if I have an urge to ‘get a fix’, it is better to fight it.

Now, to be clear, I am not saying that I will never have sex again. However, I need to find someone I can connect with on a deeper level, before I ‘let them in’ physically.